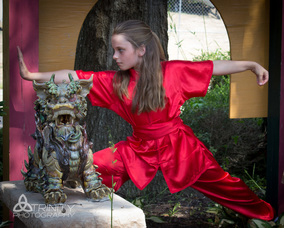 Wushu is the most popular national sport in the country of China, and is practised by people of all ages. Wushu is practiced for its method of achieving health, self-defense skills, mental discipline, recreational pursuit and competition. Wushu is characterized by its dynamic and fluid motions along with its arial kicks, rolling techniques and weapons.Wushu  is composed of many  Northern and Southern  Chinese martial art styles. Wushu is known for its flavor, rhythm, its beauty.

Kung Fu is Chinese martial arts, popularly referred to as kung fu or gung fu (Chinese: 功夫; pinyin: gōngfu), and also by the Mandarin Chinese term wushu (simplified Chinese: 武术; traditional Chinese: 武術; pinyin: wǔshù), are a number of fighting styles that have developed over the centuries in China. These fighting styles are often classified according to common traits, identified as "families" (家, jiā), "sects" (派, pài) or "schools" (門, mén) of martial arts. Examples of such traits include physical exercises involving animal mimicry, or training methods inspired by Chinese philosophies, religions and legends. Styles that focus on qi manipulation are called internal (内家拳, nèijiāquán), while others that concentrate on improving muscle and cardiovascular fitness are called external (外家拳, wàijiāquán). Geographical association, as in northern (北拳, běiquán) and southern (南拳, nánquán), is another popular classification method.

The Main Styles of Wushu

How is wushu related to kung fu and taijiquan?
"Wushu" is the correct term for all Chinese martial arts therefore kung fu and wushu were originally the same. During the last thirty years, wushu in Mainland China was modernized so that there could be a universal standard for training and competing. In essence, much emphasis has been placed on speed, difficulty, and presentation. Consequently, wushu has become an athletic and aesthetic performance and competitive sport, while "kung fu" or traditional wushu remains the traditional fighting practice. Taijiquan is a major division of wushu, utilizing the body's internal energy or "chi" and following the simple principle of "subduing the vigorous by the soft." Although still in budding stages in many countries, wushu is an established international sport. In 1990, wushu was inducted as an official medal event in the Asian Games. Since then World Championships have taken place with 56 nations participating. Wushu is also vying for the Olympic games in the 21st century.

"Praise be to the LORD my Rock, teaching my hands the use of the sword, and my fingers the art of fighting"
-Psalm 144:1